In the forest of Asia, thousands of tigers have been killed in the last 50 years because their habitat is destroyed by bulldozers and chainsaws. There are also killed for their fur.

There were eight tiger subspecies at one time, but three became extinct during the 20th century. Over the last 100 years, hunting and forest destruction have reduced tiger populations from hundreds of thousands of animals to perhaps fewer than 2,500

The lynx is a big cat which is carnivore and  lives in Canada but also in Asia and in European forests. This big cat is a mammal and live   10 to 15 years. reasons why it is endangered:

The hunting of lynx is illegal in many countries.

This beautiful animal is hunted for his fur coat. This coat is used to make clothes or hats. Habitat: used to live in North America and is now reintroduced in North California mainly in the forests, the swamps and the coastal prairies.

The red wolf is the cousin of the grey wolf. It is a canid. Its natural habitat is Texas, Florida and New York.

It’s an endangered species. Because it eats pigs and rabbits, it is killed by ranchers and farmers. People have cleared forest and have eliminated their habitats too. So in 1980 it was extinct in the wild but since then it has been reintroduced by a population in the North California. 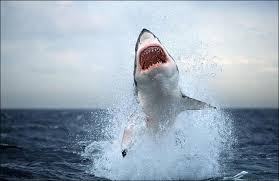 What is their habitat?

Sharks are found in all seas and are common down to depths of 2,000 metres. They generally do not live in freshwater, with a few exceptions such as the bull shark and the river shark which can live both in seawater and freshwater.

What about the shark population?

In recent years, many shark populations have declined dramatically. Sharks have been under increased fishing pressure, both from recreational and commercial fishermen. Loss of important shark nursery areas in coastal waters due to pollution and development have further aggravated the situation.

Why are sharks endangered?

Shark fins are prized culinary ingredients in Asian foods, such as shark fin soup. To supply these markets, fishermen employ the practice of "live-finning" cutting off the fins of live sharks and throwing them back into the water. This wasteful practice in combination with the shark's naturally low reproduction rate (the gestation period may be up to two years) has put a severe strain on many shark species.

Here are some funny or spooky
GHOST  STORIES
written by the 402 and 407.

Have a read on the different stories and vote for your favourite!

Ghost in the White House (Clément 407)

Ghost in the white house

Barack Obama was working in his office when he heard strange noises in his desk.He opened a drawer but suddenly he fell into  a trap.He arrived in a sinister room and saw a horrible and scary head with a smile.The head said:"I'm an old President and you are not welcome in the white house !" Barack was terrified and shuddered.The head added:"I'm Kennedy!"
Barack thought:"Better and better....No it's impossible ! I must be dreaming !"


Last month I was walking in the forest. I heard a strange scream. As I was hiding behind a tree,I saw the figure of a woman.She was coming closer and closer to me. My heart was beating really hard. While I was looking around,the figure was walking up to me touched me. Her hands were hairy. I screamed and I tried to run but she held me very hard so I couldn't escape.

When I woke up, I was in a wooden cabin all by myself.It was very dark outside and it was all quiet.
Then, I felt a cold wind crossing the room. And a ghost appeared in front of me:
"What are you doing here ?" ,said a ghost in a deep voice.
"I was kidnapped while I was walking in the forest",I answered.
"I can help you if you want", said the ghost.

And the ghost helped me to find the road.
Since this day the ghost has stayed by my side and became my gardian angel. On a cold November night, I was eating with my friends we were having a pizza party at a friend's place, just as usual.

We were speaking our little stories when we heard a dog barking.

We thought that was just the dog of the neighborhood but the barking was endless.

So we stood up and looked out of the window but at the same time somebody knocked on the door. But when we opened the door, there was nobody there.

A few minutes later the lights went out,  the television began to change channels and all drawers opened.

We were very scared.

Suddenly the phone rang but no one spoke over the phone, we could just hear someone breathing. At the same moment, the door opened and a large figure appeared to us. We all screamed and the figure disappeared . Then it reappeared and told us in a creepy deep voice:

We were terrified and couldn't move a finger. the ghost was becoming nervous and set the house on fire. The flames were all around us. My friends screamed in terror.

The  fire fighters and the police arrived quickly and did not believe a word we were saying.

It was the night.Valentin and me were walking in the park.Suddenly we saw a shadow behind a tree.The shadow was tall,and it was making strange noises.We were terrified.Suddenly, the shadow came closer and closer.We were able to see his face...WHITE....all white.Just his eyes were red! He was walking weirdly. In his hand...something..something quite long.

Valentin and me were trying to hide behind a bench.Too late, he was here. An old homeless was in front of us... We looked up at him and noticed he had a black hole in place of his mouth. We screamed and ran away.

Our parents did not believe us when we told them the story.
Do you think we were lying?

I was walking in the forest.It was very scared because I heard a voice,a little "boo". I still walked and the voice said again "boo""boo""boo" and I saw a ghost.

It was the ghost of my last girlfriend!The ghost was grey and beautiful. she asked me to sit down and killed me with a sword.
When I came back to life , I was a ghost too! All white with chains around my wrists.

And my mother woke up me. It was only a bad dream!I got up and brushed my teeth in front of the mirror. But there was no reflection at all. I was a real ghost!It wasn't a dream!

The white form that was me was smiling as a sword appeared in my hand....