jack o' lantern: what is it?

A jack-o'-lantern (sometimes also spelled Jack O'Lantern) is typically a carved pumpkin. It is associated chiefly with the holiday Halloween, and was named after the phenomenon of strange light flickering over peat bogs, called ignis fatuus or jack-o'-lantern. In a jack-o'-lantern, typically the top is cut off, and the inside flesh then scooped out; an image, usually a monstrous face, is carved onto the outside surface, and the lid replaced. At night a light is placed inside to illuminate the effect. The term is not particularly common outside North America, although the practice of carving lanterns for Halloween is.

Halloween around the world

As one of the world's oldest holidays, Halloween is still celebrated today in several countries around the globe, but it is in North America and Canada that it maintains its highest level of popularity. Every year, 65% of Americans decorate their homes and offices for Halloween...a percentage exceeded only by Christmas. Halloween is the holiday when the most candy is sold and is second only to Christmas in terms of total sales. 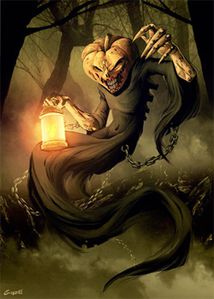 The term Jack of the Lantern first appeared in print in 1750 and referred to a night watchman or a man carrying a lantern. Previous to print, it was used to describe a strange light flickering over the marshes of Ireland. If approached, the light advanced and was always out of reach. The mysterious occurrence is also known as will o' the wisp and ignis fatuus, Gaelic for foolish fire. However, its legendary status reaches far back into Irish folklore with a story of a stingy drunkard named Jack.